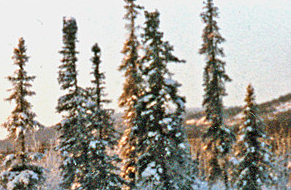 Stand of trees near Nelchina

Wednesday, September 16, 1981—Darrel and I are going out with the swamp buggy. We got the gear packed, but didn’t get started until late. We got about a half mile off the road and stopped for the night.

Thursday, September 17, 1981—the next morning we were up early and we drove the seismic trails on our way to Ranger lake and we were climbing a small knob with the “mean machine” (also known as the swamp buggy) and as we got up to the top, the brush is all torn up and piled. We realize that this is where a grizzly has made a kill. We aren’t too worried in the machine we’re in. We looked the place over and there was part of a yearling moose that still hadn’t been eaten. Later we saw a pretty darned nice, bull moose swim the lake just south of Ranger Lake. We walked around Ranger Lake and were not overly impressed. We’re looking for land to claim in this “Green Acres” that the state is putting up for people to claim for cabins and land of their own. We did see ducks, two swans and a flock of large geese fly over. This was before I knew that the geese nested and raised young in this part of Alaska. Quite a few geese were nesting in this area.

Friday, September 18, 1981—cloudy early then the sun tried to shine. Got a late start, ran seismic trails looking for a way to Old Boot Lake. Generator quit. Camped for the night at a starting place to walk to Old Boot Lake in the morning. Raining, tent got wet, slept in swamp buggy.

Saturday, September 19, 1981—got up early ate breakfast but got a late start. Saw wolf, caribou and moose tracks and sign. Walked right to Old Boot Lake across country from another seismic trail. It’s a very nice lake. Looked it over and also stopped at other small lakes. Quite windy all day. Got back to camp close to dark. Darrel and I each found 40 acres that we would like to get from the state in this “Green Acres”. They happen to be side by side. He has one along one lake and I have one on Old Boot Lake itself. I chose Old Boot Lake and Darrel chose the lake right next to Old Boot Lake. Later he named it “Satiety”.